One thing I wish to see in languages such as PHP is to find them supporting the complex type. Complex numbers are more than vectors in 2D, and I wish to see expression containing them parsed just like the ones with real numbers. Python supports them, and you have to import ‘cmath’ to use functions of a complex variable. To import cmath type

Following is the Cardan formula for solving a cubic equation

Find 2 numbers u and v that will help us solve the equation. If y=u+v , then the new equation will be:

From both equations, we get that latex u^3 and latex v^3 are the roots of the quadratic equations

The roots of the quadratic equations are:
(1)

In Python, the inner root can be computed using:

Now, u and v are cubic roots of (1) and (2) respectively. They must satisfy 3uv=-p.
In Python, you get your initial u using:

(The above values are output from Python script. The real results look much better.)
Now, to get the roots of the original equation, add

to each y.
In our example,

Writing expressions is much easier and more readable when the language supports the complex type.

When you see a change in the major version (the number before the first point of the version id), expect a great leap. New features have been added to PHP in version 7, that make programming more convenient. I’m going to discuss some of them.

Suppose you’re trying to get a value from a request, and set it to zero if not sent. So instead of typing

Simply use ?? as follows:

When making a decision based on comparisons between to values, would you like to use a switch command instead of if ... else? Use the operator ‘<=>’ to compare numbers or strings.
$a<=>$b will return one of the following values:
* -1 if $a is smaller than $b
* 0 if $a equals $b
* 1 if $a is greater than $b

Generator functions have been introduced in PHP 5.5. They allow you to elegantly use generated values in a foreachloop without calling the function time and time again.
For example, the following code:

Following are features introduced in PHP 7:

In addition to generating values, a generator can return a value using the return command. This value will be retrieved by the caller using the method getReturn().

For example, the code:

will produce the output:

will produce the following output

A return type can be declare by adding it at the end of the function declaration after colons.
For example:

Why Write The Return Type At The End?

Two possible reasons to write the type at the end of the declaration and not at the beginning like in Java, C, and other c-like languages:
* In PHP, the function declaration begins with the keyword funcction. The return type is optional.
* This syntax already exists in AcrionScript.

Find more about PHP 7 in the chapter Migrating from PHP 5.6.x to PHP 7.0.x of the php.net site documentation.

I remember that little prank from the days I was a student. You work on an X terminal, and out of the blue, all the display contents gradually disappear’ Pixel after pixel turns black. But don’t worry – you’ll regain control over your display shortly. shortly.
Everyone can access other X terminal display, and mess with it.

How Does It Work?

This program is a simple one using the GDK library, Gnome’s window management package. Including ‘gdk.h’ will also include:

The main function of the program performs the following steps:
1. Initialize GDK.
2. Create a window whose dimensions are the same as those of the root window.
3. Make the window’s background transparent.
4. Make the window a full-screen window.
5. Add an event handler. to handle Expose events.
The event handler will perform the following steps:
1. Create a list of columns and lengths (number of blackened pixels).
2. Create the Graphics Context for the window.
3. Blacken pixels until all pixels are black.
4. Quit the main loop.

In linux, compiling a program is easy thanks to the pkg-config command.
Run the following from the command line:

Now, to run the program type:

I have received by e-mail a rotated video in the ‘flv’ format. The video was supposed to be a vertical one, but it turned out to be horizontal, that is ROTATED. So, I wrote a little program to rotate it back using libming.
There are two things to take care of when processing the input FLV:

Both can be taken from the FLV file.
The code is written in C++, but can be translated easily into PHP. Following is the code:

This will create a real vertical movie. Don’t share it on YouTube or anywhere you cannot control your movie dimensions.

D3 is a JavaScript framework used for data visualization.
Learning how to work with D3.js is very easy. If you begin with the basics, you’ll see how easy it is to use D3, because:

If you already know some framework, you probably feel that there’s nothing new under the sun, which is good because it makes learning the new stuff easier.

In D3, you can:
* add and remove SVG and HTML elements using the setters and getter.
* set and get the element’s properties, attributes, styles, text and… data

First, download the framework from http://d3js.org
After you include it in your script, you can use selections, that is wrappers for elements.
To get a selection, use one of the functions:

Like the d3 object, selections has their select and selectAll methods to select descendant.

If func is not passed, the key is the element’s index.

A recommended way to create an update selection is:
var updSelection = selection1.selectAll(selector).data(arr)

The methods attr, style, property, text and data can accept a function as a value to set. The function will be called for each element of the selection’s data. And its arguments will be the array element and its index.

Now, let us see it in an example.
The following code arranges data in a donut layout::

And following is the chart: 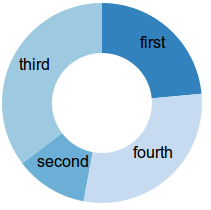 Let’s look at the following equations:
1.

The Bézier curve is a popular way to draw curves in graphic editors such as GIMP and Inkscape. A curve of degree n is defined using n+1 points, where the first and last are the start and end points of the curve, respectively, and the rest are control points.
For example:

The curve in the image above is a cubic Bézier curve. It has start and end points (filled with blue) and two control points (with no fill).
Each control point is attached by a straight line to a start or an end point, for a reason:

A Bézier curve is defined as the collection of points that are the result of the function
B(t) for every t in [0,1].
A linear Bézier is simply a straight line between to points P0 and P1. The function is:
(1 – t)BP0 + tBP1

Or, in its explicit form:

(Not a very precise definition because 00 is not a number, so use the value 1 instead.)

This equation can be proved easily using the Pascal triangle.
From the explicit definition, you can see that the translation is done by adding the same coordinates to which of the curves start, end and control points.
because:

To prove this we’ll have to show that the derivative of a Bézier curve of degree n at the start and end points is a non-zero scalar multiplied by the difference between P1 and P0, and between Pn and Pn-1.
That scalar is n.

SVG supports Bézier curves of up to the third degree. A path consisting of such curves are good approximations of shapes provided that you have enough points.

The Recursive (and Naive) Solution

The function that moves n discs from src to dst using aux looks like:

We’ll use that function later to prove that the non-recursive algorithm does the same.

A naive iterative solution is to use a binary search and find for each move of a disc, the parameters passed to moveDiscs when n=1. This is crazy! We don’t want time complexity o(n) just to move the first disc.
Let’s look at a better solution:
Repeat the 3 steps in table 1 until all discs are moved, depending on the value of n:

Note: perform no more step after all discs have been moved to the destination.

Let’s look at the first call to moveDiscs inside itself:

Let’s look how it is performed:
Per our assumption, the sequence for steps 1 thru 2n – 1 is

Because if n is odd, n+1 is even and vice versa, we get that the first steps are performed correctly by the iterative algorithm

Those steps are performed by the second call to moveDiscs inside itself:

In this table we see the steps that follow step 2n.
Thus, the algorithm works correctly for the last part, and thus our whole algorithm is correct.

You can now watch a working Hanoi animation here.

Would you like to add posts to your blog with a cool editor? Do you want to publish in Blogger, WordPress, Tumblr, etc.?
Try StackEdit Click the link you’ve just seen, and start editing a markdown document. Forget about switching from WYSIWYG to HTML and back. Enjoy a split-screen instead: one side is where you type in markdown format, and the other is the WYSIWYG result.

Editing a post is simpler than editing an HTML page, and sometimes even simpler than working with the text editor provided by the blogging site. For example, if you add code to your post, just write it between two lines starting with three back-ticks (back-quotes).
For example:
‘‘‘
var j=3;
‘‘‘
will be displayed as:


You can learn more about markdown syntax, by clicking the syntax icon in from the floating menu at the bottom:

Before publishing, let’s set variables, such as tags. Type your variables, between two lines, consisting of three dashes as follows:
—
variable: value
—
For example:
—
tags: tag1, tag2, tag3
—
You can see which variables you can set, when you decide where to publish your post.
To publish a post, click on the ‘#’ menu, and choose publish as shown in the following image:

After choosing the site to which you want to publish, click OK or Cancel (if you want to set the interpreted variables, for example.)

NOTE: It is recommended to upload images to the site before including it in your document.

Now, you can use StackEdit to update your post.
Enjoy!

How do you declare a static variable in a JavaScript function?
Not with the word “static“.
In JavaScript “function” is a variable type similar to “object“.
The difference is that the reference to a function inside itself is not this but arguments.callee.
An example of using arguments.callee is the following function that returns itself:

You can add arguments to arguments.callee. To initialize it the first time, check first if it is not defined. For example:

Following is an example function in [rhino(http://rhino.org) JavaScript(run from the command line):

In this example, you can change the static variable’s value without calling the function using _example.static = "some value";.

To prevent this, encapsulate your function using a function called once, for example:

Now, each time example() is called, it will increment the variablestatic, but the variable cannot be incremented without calling example because _example is private.